I woke up with the birds this morning, but had a tough time leaving the comfort of my sleeping bag. I eventually started getting ready at about 6:45 and there were already 5 or 6 people breaking down their tents and getting their bags ready too. I ate a pop tart and drank a protein drink while I was getting my things together and I was on the trail by 7:15. The start of the day was tough. A 2000 foot vertical gain in the first 2.5 miles and the heat already made its presence early. I worked up a heavy sweat early and kept telling myself to keep moving. It was a mental and physical battle, but was worth it when I got to the top and I was able to catch a view. I passed two couples on the way up, one old and the other young, but besides that didn’t see anybody in the morning. I filled up my water before I left the shelter, but drank it quickly and after 5 miles I needed some badly. I kept walking for another two miles and finally found a stream so I drank a couple liters of water and ate a glazed peach pie and some gummies. A little bit further up the trail some had left some “trail magic” and I took a box of Wheat Thins and an apple. I polished off the whole box right away and washed it down with the apple. The next stretch of the trail was nice with some ups and downs, but mostly flat and I was able to make up some ground. I got to a shelter at around 3 o’clock and stopped to have some lunch and soak my feet in the stream. My feet were barking at me before I got there so it was nice to put them in the cool water. I dilly dallied for a little bit because the next 4 miles coming up after the shelter was a 3500 ft elevation gain which is a hard climb, but I was also excited because I was going to pass the 800 mile mark! By this time I had already hiked 19 miles and the steepness of the hill was crushing me. It was a battle. Halfway up I met two section hikers, Fresh Air and Cool School, talked to them for a little bit, and they ended up topping off my water bottle so I would be fully stocked for the climb. They were so nice and it was cool to get more trail magic! It took 2.5 hours to get up the hill and instead of pushing on to the campsite I decided to go to the shelter for the night which was .5 miles off the trail. I’m the only one here tonight so I set up my tent in the shelter so the bugs won’t attack me. For dinner I had two bags of cheez its, two packets of ramen, and a bag of m and ms. I can’t wait to have an early night and a good nights sleep and get back at it tomorrow! 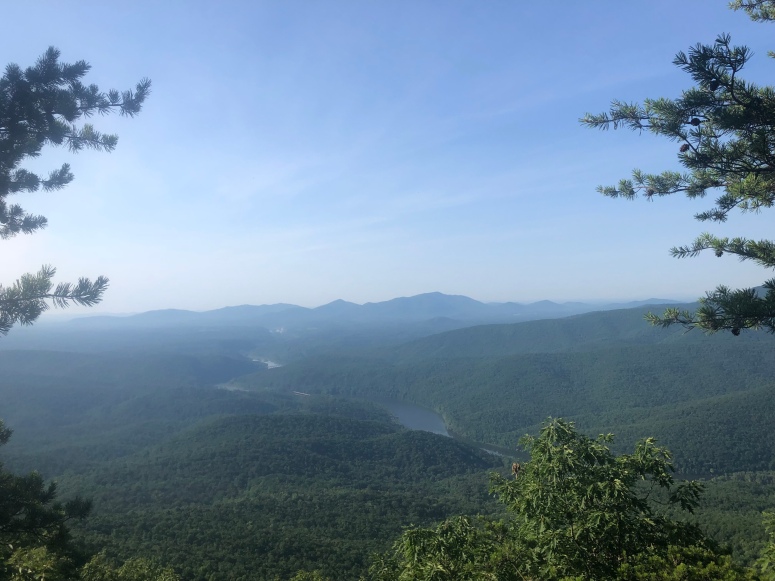 Having the shelter to myself last night was nice because I didn’t wake up from someone getting their things together. I woke up around 7:15 and started to get ready for the day. I made a peanut butter and honey tortilla and protein drink for breakfast and drank a liter of water because I knew it was going to be hot today. I started the half mile walk back to the trail around 8 and finally got back to the A.T. around 8:15 and started the day. The sun was bright and there was no breeze so walking through the open ridge made me start sweating pretty much right away. The first mile was open and grassy and the views from this point were pretty awesome. Looking out you could see layers of mountains miles and miles away. I passed a couple hikers about 4 miles in, but didn’t see anyone else until I took a break a little after that and I ran into Masa. Masa is a thru hiker from Japan who hiked the PCT last year. I last saw him a little more than 100 miles ago in Pearisburg. It’s cool running into people after not seeing them for hundreds of miles. We talked for a little bit and then I was back on my way. For the next few miles the trail made it back into the woods and as I turned the corner I bumped into Fuego, Camo, and Spaceship. We ended up hiking together after that for the next 14 miles or so. I was drinking so much water because it was so hot that every time we stopped at a water source I would drink an entire liter before we would start hiking again. The toughest climb of the day was up Priest Mountain which had a 1500 ft elevation gain in 1 mile. It was tough and I had to dig deep to keep pushing, but eventually made it up and stopped at Priest Mountain Shelter. A thru hiker named Professor was there eating lunch and we chilled for a little bit and got water. Everyone who signed the shelter log started with “Forgive me father for I have sinned…” and then went on to right about something “sinful” they’ve done on the trail (ex. Not hanging their food at night or not digging a hole when they go to the bathroom). From the shelter it was another 6 miles to the shelter we were staying at for the night, with a steep descent and then one last decent climb up to the shelter. We got the shelter at around 7:30 and saw Gabe there who I last seen a week ago in Daleville. We all ate dinner together (I had two boxes of Annie’s Mac and Cheese) and then finally laid down right after that. Fuego and I set up our tents in the shelter tonight to keep all the bugs away. It feels so good to lay down. Big day tomorrow into town! 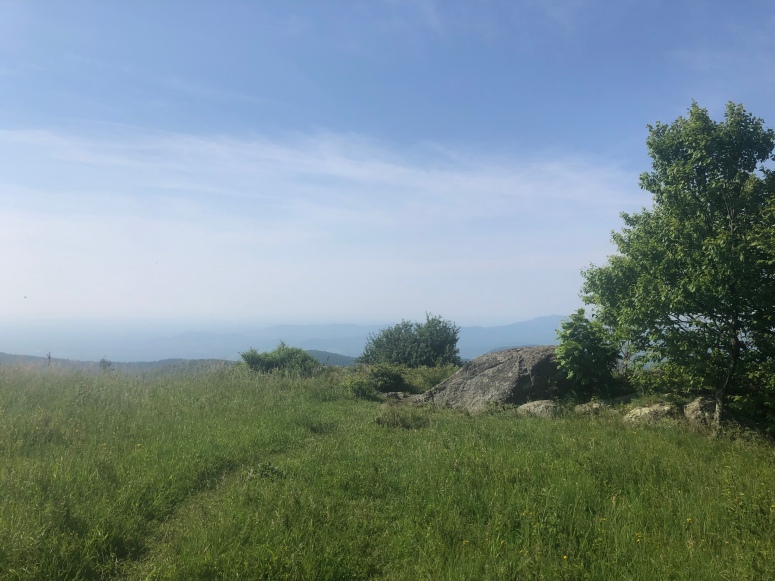 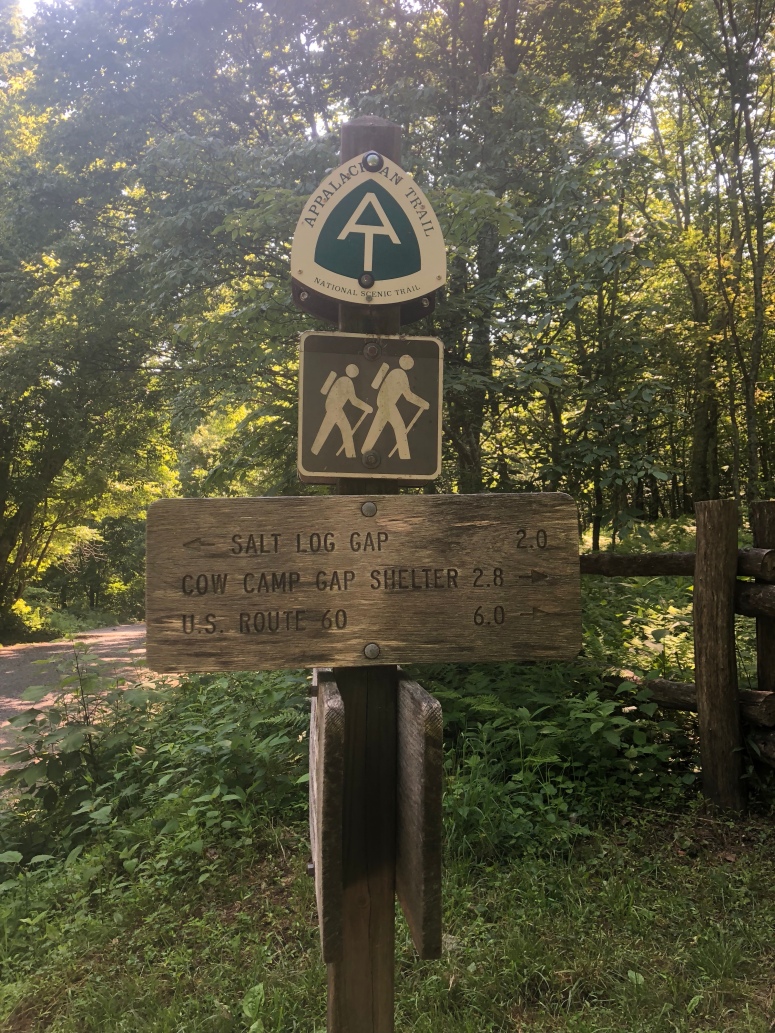 I think the long days and hot weather is taking a lot out of me because this morning I didn’t wake up until 8 o’clock and even when I woke up I laid in bed for another 20 minutes. It feels really good to get a nice rest because the next day of hiking I feel refreshed and ready to attack the day. I ate breakfast and got my stuff ready and me, Fuego, Spaceship, Gabe, and Camo hit the mountains around 9. The day started out with a huge climb for the first 2 miles, with some parts making me put the trekking poles away and using my hands to get up the rocks. Virginia has had some serious climbs and the terrain has been so different than the past 3 states. It took an hour and a half to get up the first mountain and I was pushing it with a solid pace. Sweat dripped down my face as I kept telling myself not to stop and keep grinding until I get to the top. I was rewarded with one of the best views so far once we reached the top and we spent almost an hour sitting up there and taking it all in. The rest of the day hiking day was pleasant with ups and downs, but nothing too crazy. The weather was again really nice and a heavy breeze kept me cool pretty much all day. I wanted to get into Waynesboro today and shower, do laundry, and resupply before heading into the Shenandoah National Park. We got to a road crossing and began the quest of hitching into town. About 5 minutes in someone offered to take us down the road 3 miles to The Devils Backbone, so we hopped in the back of the pick up truck and got dropped off at the restaurant. I was starving and ate a bowl of chili, fish and chips, and a root beer float. After we ate we got another hitch about 5 miles down the road and had to get dropped off because that was as far as he could take us. Waynesboro was still another 10 miles out so we spent another 15 minutes trying to find a ride and someone offered to take us about 7 miles closer in the back of their truck. During this hitch we drove through a storm and got soaked haha. We got dropped off and almost immediately one last car stopped and took us into town. The driver, Ernie, runs an air B and B so I decided to stay at his spot for the night. I showered and did laundry then got dinner at the all you can eat Chinese buffet where they told me I had to leave because I was eating way more than I was paying for. Haha ok they didn’t tell me to leave, but I did eat my fair share. I’m excited for the Shenandoahs tomorrow. Supposedly there are a lot of bears in this area so let’s hope I see one and it doesn’t eat my food! 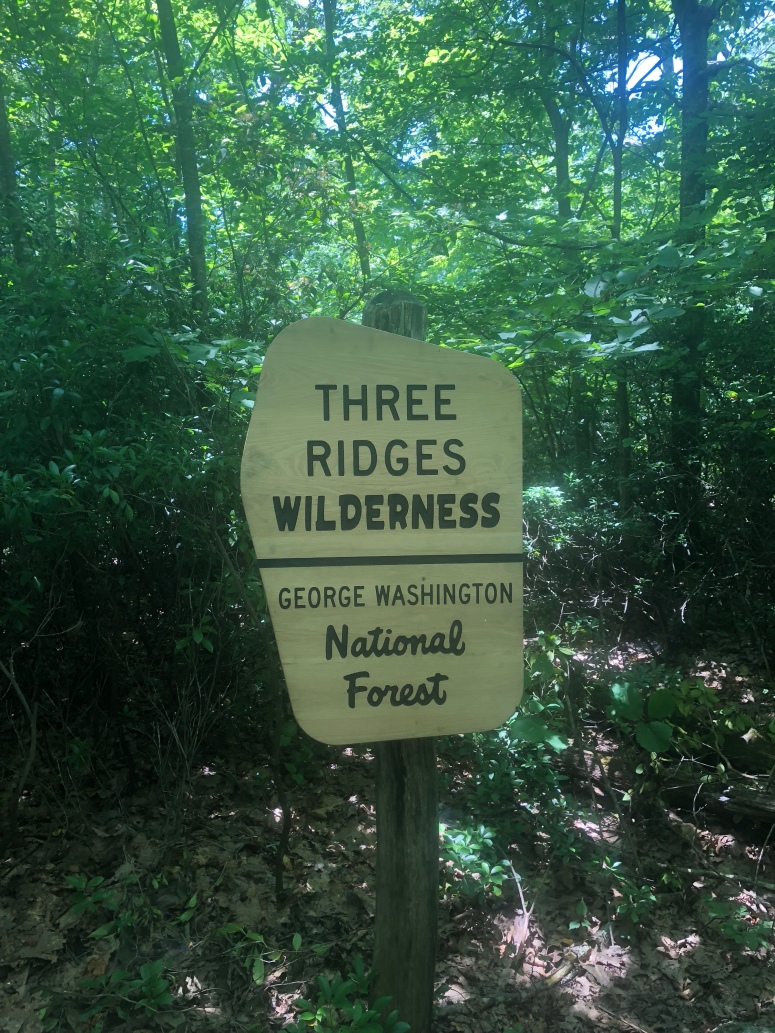 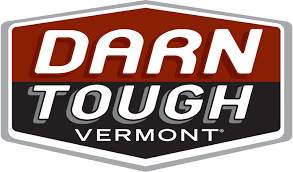